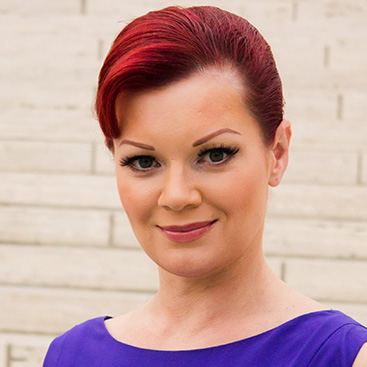 Natalia Lind is an internationally acclaimed performer, choreographer, and dance teacher. The daughter of a Russian opera singer and a well-known archeologist, Natalia has been immersed in the world of theatre, music and dance almost from birth.

Throughout her childhood, Natalia studied ballet, theater, classical piano, dance, and more. At nine years of age, she was accepted into a Russian ballet conservatory. Later, her abilities earned her a coveted spot in the Russian Academy of Theatre Arts (GITIS), one of the top performing arts schools in the world, where she earned her MFA in Performing Arts.

In 2001, Natalia’s musical theater career brought her to Los Angeles. There, she took extensive private training in International Standard and Latin, American Smooth and Rhythm, and the club styles, and became dance partners with Michael Kuka. During their ongoing partnership, Natalia and Michael have performed in numerous high-profile shows, including the The Live Laurence Welk National Tour, Fascinating Rhythms starring Grammy Award winner Marissa Manchester, which received an Ovation Award for Best Choreography, Tango Fiesta with Walter Rios and Mariel Dupetit, and Sentimental Journey at the Candlelight Pavilion. Natalia also traveled to Buenos Aires, Argentina, to study Tango with the top masters of the dance. Her deep love of Tango led to a partnership with the renowned Orlando Farias.

Natalia’s comprehensive and eclectic artistic background gives her a uniquely versatile approach to choreography and instruction. Whether she is crafting an original dance show, or guiding a student, she emphasizes technical excellence, yet cultivates every dancer’s unique creative expression. Natalia’s innovative teaching methods lay the foundations of technique and style early, in fun, approachable ways, so that students can progress smoothly to advanced levels—or just look and feel amazing on the social dance floor.

Featured
Private Lessons
45-minute, 1 on 1 lesson.
By Appointment Only.
Price$115