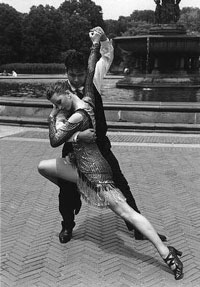 This gorgeous and improvisational style of dancing has its origins in the brothels of Buenos Aires in the late 19th century. Argentine gauchos (cowboys) would dance with the prostitutes in what was then the world’s first Milonga. Argentine Tango has evolved to become the extraordinary dance form that is today.

It differs from American Style (or Ballroom) Tango in several ways. The Argentine Tango hold is more of an embrace, with the couples’ upper bodies close and the legs far apart (the better to execute the complicated kicks, or ganchos that is a crucial aspect of this organic dance.) Whereas Ballroom Tango is very formalized, Argentine Tango is an improvisational form, with both partners contributing to telling the story of a relationship that is encompassed in each dance.

Argentine Tango music features violins, piano, and an accordion-like instrument called the bandoneon. Some of the greatest Tango music in the world was composed by the Argentine genius Astor Piazzola, who is widely regarded as one of the great composers of the twentieth century.

Ballroom tango was born in the slums of Buenos Aires in the late 19th century. Argentine gauchos and migrating black met and mixed in the infamous Bario de las Ranas, trading cultural rhythms and dance steps in and around the areas well-known brothels. From this melting pot emerged a highly passionate dance, one that the respectable classes of society shunned. But as with the Waltz, there is nothing like controversy to make a dance popular.

In the US, Tango became all the rage right before the First World War. Vernon and Irene Castle made their fortune from Tango, becoming America’s sweethearts of the dance. There was a flurry of Tango dance hall openings and tango teas became popular in big hotels. Couples even danced between courses at the finer restaurants. Rudolph Valentino did his part, performing a sensual Tango in the silent film “Four Horsemen of the Apocalypse”. The dance varied greatly from performer to performer and was eventually standardized in the 1920’s by the Imperial Society of Teachers of Dancing.

Tango is characterized by a close hold, a low center of gravity and an emphasis on Contra Body movement. Movement is stealthy, almost cat-like and has an unmistakable staccato feel and major dramatic attitude. The Leader’s right arm is further around and lower on the Follower’s back than in the other Smooth dances. The left arm is bent at 90 degree angle with left hand held closed in toward the Leader’s body and face. The follower’s left hand is placed behind and below the Leader’s upper right arm.