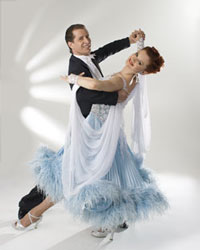 You will also hear these dances called the ‘Smooth’ dances. These dances move around the dance floor in a counter-clockwise fashion. These ballroom dances are elegant, beautiful, and dramatic, each with its characteristic style.

These dances, also called ‘Rhythm’ dances, feature many of the sensual, romantic, sexy Latin dances as well as the quintessentially American East Coast Swing. The Latin dances are “spot” dances, meaning the couples generally dance in the same spot on the dance floor as opposed to traveling around the dance floor in a counterclockwise circle, (as they do in the Ballroom or Smooth dances.) Dances below are the dances we teach in our Ballroom/Latin series classes. 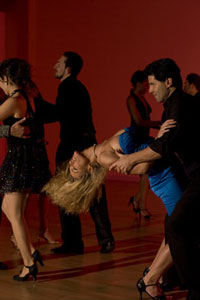 These are dances that have their origins in night clubs and dance halls, as opposed to on the competition ballroom floor. The club dances often have a full community of dancers who dance only this dance. Each of these club dances has its own evolving culture, legendary dancers, and legendary musicians, as well as new and evolving styles and cultures.

At Ballroom Dance Academy, we emphasize American Style ballroom dancing because it is much easier for students to learn and much more conducive to social dancing. That said, we do offer a few International Style classes in our Sunday Specialty Series. Here is a description of those dances.

D1. INTERNATIONAL STYLE STANDARD DANCES: These dances are the counterparts to the American Style Smooth dances. They travel around the ballroom along the line of dance. The Standard dances are: