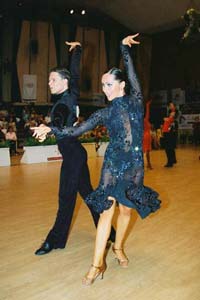 This is a fun, flirty dance that grew out of the Cuban Mambo and became immensely popular in the United States in the 1950’s. It consists of triple chasse steps (cha cha cha’s) and rock steps.

Cha Cha has a modified Cuban Motion hip action, because of the speed. This is an exuberant dance that will get your heart pumping and put a smile on your face.

Cha Cha originated in Cuba and evolved from a slow version of Mambo called “Triple Mambo” or Mambo with guiro rhythm. This musical rhythm inspired dancers to dance a hip syncopation to the forward and back breaks of a mambo which late evolved to a triple step.

Mambo evolved from a fusion of danzon, son and American jazz. Danzon has its origins from Europe (chamber music) and African/Haitian drum rhythms. Enrique Jorrin, a Cuban Violinist created the first cha cha song in 1948. He named it after the shuffling sound the dancers shoes made when they dance to this type of music.

In 1952, an English dance teacher Pierre Lavelle visited Cuba and saw dancers dancing this triple step to slow rumba and mambo music. On his return to Britain, he taught this as a separate dance and it has since evolved to Ballroom Cha Cha.

Cha Cha was introduced to the US in 1954 which replaced mambo as the latest dance craze. After its introduction to the US, the traditional violins and flutes were exchanged with big band instruments such as trumpets, trombones and saxophones.

Cha Cha is a lively, fun, cheeky and playful dance. It is a non-progressive dance that emphasizes Cuban motion, distinguished by the chasses (cha-cha-cha) typically danced during the 4&1 counts of the music. Cuban motion in Cha Cha is more staccato than Rumba to reflect the music with emphasis on count 1. The Cha Cha frame is a typical Rhythm frame.