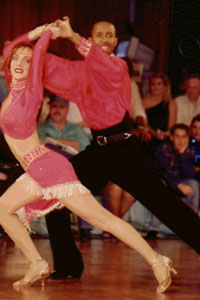 The Hustle is the partner version of disco dancing. It is a fast moving, energetic dance characterized by its many turns. The lady spins almost constantly while her partner draws her close and sends her away. Hustle is still very popular at West Coast Swing dances and in some Latin clubs.

It is a fusion of swing and disco, a return to partner dancing, a modified lindyhop and jitterbug, still very popular in crowded dance floors in New York. Music played for the Hustle is modern, based upon rhythm and blues.

The 1960’s rock and roll almost killed ballroom dancing. The freedom of dancing without a partner – shaking on your own or just meet hip to hip with a satisfying bump was so much easier than learning how to Ballroom dance. Chubby Checkers’ hit “Let’s twist again” in 1961 started the solo dance craze. Critics of course, called the dance obscene because of its gyrating hip movements. By the mid-1960’s, more than 5000 discos had opened in the United States.

The twist set the stage for other gyrating dances like the Shake, the Hitchhike, the Monkey, the Pony, the Swim and the Funky Broadway. These solo freestyle dances coincided with the beginning of the women’s movement which challenged the idea of a man always leading. But couples dancing did not go underground for very long. It exploded back on the scene with the Hustle which appealed to the young people.

The name ‘Hustle’ was originally a Line dance of the same name. The Hustle is said to have originated in 1970 in New York City’s African-American and Puerto Rican Bars. Its popularity spread with Van McCoy’s recording of “The Hustle” which was on the national charts for 18 weeks. The ‘couples dance’ that was to later steal the name when the movie “Saturday Night Fever ” hit the scene was a mixture of Latin and Swing, mixed to the new modern Disco beat. Popular disco music of the 70’s included Bee Gees “Stayin’ alive”, “Night fever”, “More than a woman”, “Everybody Dance” (Chic) and Donna Summer’s “Love to love you baby”.

In the 1970’s, a small group of young adults and teenagers formed a subculture in New York City: competing in the many discos dance contests, mostly performing “Rock”. Some of the popular clubs at this time were “The Contiki”, “Footsteps” and “The Red and White” where the best dancers from the boroughs of New York City would gather to dance, compete and exchange information.

In 1973, at “The Grand Ballroom” disco, a new “touch dance”, without a name, was being exhibited by woman. It was a simple 6-count step with a very basic form, including inside and outside single turns. This was the birth of what would later be called Hustle. The young men of the club took notice, and became interested in this new “touch dance” since it was a return to romance and quite simply, a way to meet women! The dance began to gain popularity, and evolved as more and more people began to participate.

In the Latin discos at that time, including “The Corso”, “Barney Goo Goo’s” and “The Ipanema”, disco music was used as a bridge between live band sets. In these clubs, couples dancing had always been present in the form of Mambo, Salsa, Cha Cha and Bolero. As a result of this fusion, the simple 6-count dance began to incorporate the “ball change” action of the Mambo. The count of the dance now became 1-2-3 & 4-5-6 and was now performed mostly side-by-side and incorporated a lot of the intricate turn patterns of the Mambo. The dance began to include multiple turns and hand changes with a ropey feel to the arm movements. Thus the danced was now referred to as “Rope Hustle” or “Latin Hustle”.

Although the main hub and innovation center continued to be New York City, in 1974 to 1975, the Hustle became more popular and spread across the United States. Dance contests began to pop up in every city. At the same time, the gay community began to exert its influence on the dance. Many of its members who danced the Hustle were in the performing arts community. They added long balletic arms and elasticity to the movement. At this time, the dance also began to move from a slotted pattern into a rotational one.

With the many dance contests, the young competitors seeking an edge introduced acrobatic and adagio movements. A whole new field of entertainment was introduced, and nightclubs, hotels and television began to hire these young and innovative professionals to perform around 1975. The young dancers continued to seek out new ways to excite the club audiences so the dance became faster and more exciting, and the original 1-2-3 of the dance was dropped and just the &4-5-6 of the count was used in order to move quickly into and out of the tricks that were so popular in the contests. So “&4-5-6” became “&1-2-3”. This was the birth of Hustle as it is counted today.

Throughout the late 1970’s, even though Hustle was still taught in many different forms (4-count Hustle, the old Latin Hustle or Rope Hustle) by dance studios, the most exciting form was done by the club dancers and competitors of New York City who performed the 3-count Hustle (“&1-2-3”). Throughout the late 1970’s and 1980’s, Hustle began to incorporate other dance styles such as Smooth Ballroom (traveling movements and pivots), Swing, and the Latin rhythm dances. The dance continues to evolve, but it has never lost its basic count since the mid-1970’s of “&1-2-3”. The Hustle is the last American partner dance born and cultivated in the United States.

Hustle is danced to the contemporary pop dance music of the last 20 years. It is a fast, smooth dance, with the lady spinning almost constantly, while her partner draws her close and sends her away. It is a non-progressive dance and mostly danced in a slot or rotational slot. It is one of the few dances that do not phrase evenly with the music: each basic occupies 3 beats of music, though the music is in 4/4 time.

Learn to Dance The Hustle in Los Angeles