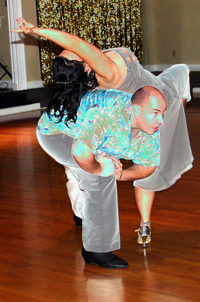 Merengue is a style of dance derived from Latin American music. It has a 2-step beat, with partners in a closed position. Of note is the left hand of the leader at eye level (higher than Salsa, for instance). With bent knees and hips moving in the same direction, the partners walk to the side or circle their partner, with very small steps.

Turns are another thing, however. Many turns in Merengue are complex, with only a moment of release, with an almost twisting to the arms, like a pretzel. There is room for exploration in Merengue with additional choreography.

While the tempo may be almost frantic, the upper body remains almost majestic and the turns are slow.

Legend has this dance originating from Latin America with a presidente that was injured in battle. Because of his war injury, he had to make different steps due to reduced flexibility, and the rest of his guest, being polite, imitated his style.

Merengue is the national dance of the Dominican Republic and also of Haiti (Meringue), the neighbor sharing the island. Musically, it has links with Cuba but the dance belongs to the island of Hispaniola – one third of which is Haiti and the other two thirds, Dominican Republic.

Merengue, the dance, originated in early 1800’s as a blend of African Dance and the French Minuet. The slaves liked a little more fun in their dancing so they added some upbeat drum music with a more animated dance step. Initially, it was not a couples dance, instead it was danced in a circle, men and women, holding hands, facing each other at arms length. The dance consisted of some shoulder shaking and fancy foot work, without the sensual hip action. It is possible the dance took its name from the confection made of sugar and egg whites because of the light and frothy character of the dance or because of its short, precise rhythms.

The merengue dance style today is said to have evolved from a leg problem. One story alleges the dance originated with slaves from Haiti who were chained together and were forced to drag one leg as they cut sugar to the beat of drums. The second story alleges that a great hero was wounded in the leg during one of the many revolutions on the island. A party of villagers welcomed him home with a victory celebration. He loved to dance but all he could do was step with one leg and drag the other to close. Out of sympathy, everyone dancing felt obliged to limp and drag one foot. As the legend does not specify “which revolution” the dance could be either Dominican or Haitian depending on which side tells the story.

The rhythms of the Dominican Republic’s indigenous chest-high, African-derived palo drums, as well as those of Ga Ga — a version of vaudou-related festive music introduced by runaway slaves from neighboring Haiti influenced early merengue in the second half of the 19th century.

High society initially frowned on the new dance craze due to its African influences and it’s topical to lewd lyrics. It was however immensely popular with the rural population. Early merengue was played by strings (guitars, tres, cuatro and quinto) to the accompaniment of the tambora, the guira (metal scraper) and the marimba bass. When German immigrants introduced the accordion in 1870, its dominant notes and capacity to deliver stabbing staccato phrases replaced the strings, establishing the definitive merengue sound and style.

Juan Baptista Alfonseca composed many merengues in the 1850s that introduced the rhythms and themes of the new republic’s folk music to the upper classes but has been inaccurately credited with the creation of merengue. The most popular merengue musician was the accordionist Francisco “Ñico” Lora from the Cibao, who wrote more than 500 merengues in the early 20th century.

Merengue got its biggest boost from the American occupation of the Dominican Republic from 1916 to 1924 and the dictatorship of Rafael Trujillo, starting from 1930. During the American occupation, Dominican nationalism found expression in merengue. Trujillo declared the traditional Cibao version the national music and dance in 1936. Alongside this ”tipico” style, an urban big-band version developed, influenced by jazz and Cuban mambo, with an emphasis on saxophone and trumpet. During the Trujillo era, the popular merengue, “Compadre Pedro Juan”, by Luis Alberti, became an international hit. Johnny Ventura in the 1970s, Wilfrido Vargas in the 1980s and Juan Luis Guerra since the mid-’80s have assimilated outside influences from rock, jazz, salsa, zouk, soukous, reggae, house and rap to launch merengue into the new millennium. While most modern merengue bands have replaced the accordion with a synthesizer and multiple brass horns, the tipico form is still very much alive.

Merengue has been heard in New York since the 1930s, when Eduardo Brito became the first to sing it. Julliard-educated Rafael Petitón Guzmán formed the first Dominican-led band with Orquesta Lira Dominicana, playing in all the popular ballrooms from 1930s to 1940s. At the same time Angel Viloria played popular tunes on accordion with his “conjunto típico cibaeño”. The music reached a mass audience in the 1960s and 1970s due to the massive migration of Dominicans. In 1967, Joseíto Mateo, Alberto Beltrán, and Primitivo Santos took merengue to Madison Square Garden for the first time. Later, New York-based groups like La Gran Manzana and Milly, Jocelyn y los Vecinos, gained a following in the US as well as the island.

Merengue is a fun, fast and easy dance made up of simple steps. It is mainly a non-progressive dance but can also travel counter-clockwise around the floor. This dance encourages creativity as it’s fun and easy to create arms movements to go with the simple steps. Merengue is characterized by its marching rhythms and Cuban motion – strong side to side motion and ‘dragged leg’ with emphasis on counts 1 and 5. The Merengue frame is the same as the Rhythm frame.

Click on the image to the right to see a demo of the Merengue dance.

Count: Merengue is in a 2 step beat.

There are three common mistakes to dancing the Merengue: