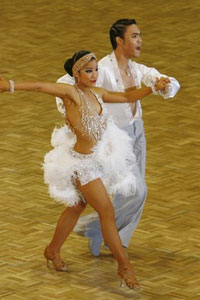 Samba is the national dance of Brazil, celebrated every year during Carnival where hundred of thousands of costumed revelers parade in the streets singing, drumming and dancing. This style of Samba is not a partner dance unlike Ballroom Samba.

Samba music originated on the Brazilian plantations where the African rhythms of slaves fused with European music. This new Samba music served as a kind of oral history, relating current events, aging against inequities or simply celebrating the joys of a great party. The dance is a solo art form with rapidly moving hips and quick transfers of weight.

Samba was introduced to the US in the late 1920’s via the Broadway play, Street Carnival and more widely exposed through films. Fred Astaire and Dolores del Rio danced to a Brazilian beat in “Flying down to Rio” and Carmen Miranda shook her hips in films such as “That Night in Rio”. In the 1960’s Brazilian music became widely popular with the release of Stan Getz “Jazz Samba” and “The Girl from Ipanema”. These bossa-nova standards combined samba rhythms with “cool” jazz.

In the US, Samba evolved into a couple’s dance performed in most ballroom and was standardized as a ballroom dance in 1956. In Brazil however, samba remains a solo form, danced at street festivals and other celebrations with nationalistic pride.

Samba is a fun, upbeat, lively dance that progresses counter-clockwise around the floor. It is characterized by its syncopated timing, bounce, rolling hip action and pelvic tilt and a great deal of rhythm is expressed throughout the torso. The Samba frame is similar to a bolero frame with more separation between the partners.