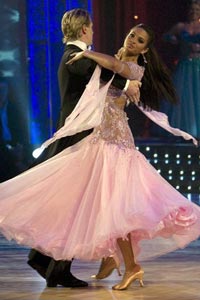 This whirling, thrilling dance dates back to the early 1700’s in Europe. It was a dance first popular with the common folk and then with the upper classes.

In 1774, the great writer Goethe wrote this about dancing the Viennese Waltz at a country dance, “Never have I moved so lightly. I was no longer a human being. To hold the most adorable creature in one’s arms and fly around with her like the wind, so that everything around us fades away.”

Viennese Waltz is danced in fast ¾ time with a 1-2-3 rhythm and features a series of left and right turns as the couple whirls around the dance floor. Popular Viennese Waltz songs include “The Blue Danube” and “The Skater’s Waltz.”

Waltz began to appear on the operatic stages of Vienna in 1787. As the popularity of the Waltz increased in Vienna, so did its tempo. Sometime in the early 1800’s, Austrian composers such as Johann Strauss and Franz Lanner increased the number of measures per minute in their Waltzes. The faster music required dancers to have greater technique and endurance.

This new version of Waltz became known as Viennese Waltz. Like the Waltz, many considered the dance to be immoral. Despite such contentions, Viennese Waltz continued to be extremely popular in Europe and America until the First World War.

Viennese Waltz is characterized by its speed (twice as fast as Waltz) as well as a rise and fall and sway (less than Waltz). With its elegance and turns, Viennese Waltz has an air of magic about it.