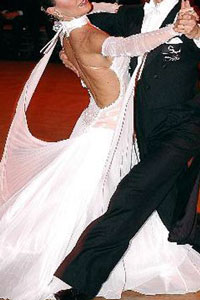 This is the granddaddy of all ballroom dances. It grew out of the Germanic dances of the 17th and 18th century such as the Ländler and the Allemande.

The name ‘Waltz’ comes from an old German word walzen, meaning to roll, turn, or glide. Waltz was the first dance in which the man and lady danced with body contact, and was considered quite scandalous in its day.

It was immensely popular all across Europe, first with the lower classes and then with the aristocracy. Waltz features a lovely, elegant rise-and-fall action, ¾ time music and a 1-2-3 rhythm.

The name Waltz came from the Italian word “volver” meaning to turn or revolve. It evolved from a German and Austrian peasant dance called the Landler in ¾ time replacing the heavy hopping and jumping movements with more polished and graceful gliding. It was also the first widely popular dance to feature a closed position. The speed of the Waltz required intimate physical communication between partners, and thus Waltz was denounced as scandalous and immoral.

Fortunately, the violent opposition faded out and the Waltz weathered an exciting and varied career, emerging today in two accepted forms, both reflecting the main characteristics of the dance. They are known as the Modern Waltz and the Viennese (Quick) Waltz.

Before the 18th century, dance was strictly divided between courtly and country forms. In the courts, dances like the Minuet were refined affairs with an elaborate language of bows and curtsies. There was little physical contact between dancers and proper form, like turned out feet was considered essential. Dance masters immediately saw the waltz (country dance) as a threat to their profession. Court dances demanded considerable practice and instruction, whereas, the basic steps of the waltz could be learned in a relatively short time, and often by observation.

As early as the seventeenth century, waltzes were played in the ballrooms of the Hapsburg court. The weller, or turning dances, were danced by peasants in Austria and Bavaria even before that time. Many of the familiar waltz tunes can be traced back to simple peasant yodeling melodies. During the middle of the eighteenth century, the allemande form of the waltz was very popular in France. Originally danced as one of the figures in the contredanse, with arms intertwining at shoulder level, it soon became an independent dance and the close-hold was introduced. By the end of the eighteenth century, this old Austrian peasant dance had been accepted by high society, and three-quarter rhythm was here to stay.

The waltz was given a tremendous boost around 1830 by two great Austrian composers – Franz Lanner and Johann Strauss. These two composers were by far the most popular during the nineteenth century: they set the standard for the Viennese Waltz, (a very fast version of the waltz).

Napoleon’s invading solders spread the waltz from Germany to Paris, then it made its way to England and finally to the United States. Reportedly, the first time the waltz was danced in the United States was in Boston in 1834. Lorenzo Papanti, a Boston dancing master, gave an exhibition in Mrs. Otis’ Beacon Hill mansion. Social leaders were aghast at what they called “an indecorous exhibition.” By the middle of the nineteenth century, the waltz was firmly established in United States society.

During the later part of the 19th Century, waltzes were being written to a slower tempo than the original Viennese rhythm. Around the close of the 19th Century, two modifications of the waltz developed in the United States. The first was the “Boston”, a slower waltz with long gliding steps; there were fewer and slower turns and more forward and backward movement than in the Viennese Waltz. This version eventually stimulated the development of the English or International Style which continues today.

The American Style Waltz is similar to the International Style except the American Style has open dance positions and the dancers legs pass instead of close. The second modification was the “Hesitation Waltz”, which involves taking one step to three beats of the measure. Although the “Hesitation Waltz” is no longer danced, some of its step patterns are still in use today. The Waltz dominated much of the European and American dance scene until the First World War when the Tango and Foxtrot enraptured a whole new generation.

Waltz is characterized by rise and fall and by sway on the side steps. The feet remain in contact with the floor at all times, creating a smooth, gliding look. Waltz is a progressive dance down the line of dance (counter-clockwise) and the Waltz frame is the typical Smooth frame essential for balance and control. Waltz has an elegant gracefulness with a romantic and sometimes sad, feel.