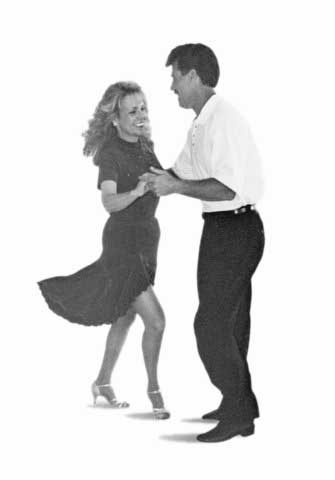 There are various stories of how WCS evolved from Lindy Hop. One is that people, tired of being kicked by wild Jitterbug dancers, began to dance in a slot. Another is that the end of the Big Band era forced dancers to move into blues club where they modified Lindy Hop to fit the smaller spaces and slower music. Others believe WCS was created in Hollywood by dancer Dean Collins because dancing in a slot made for better camera shots.

Whatever its true origins, WCS was born in California during the 1940s. Called “Western Swing” this new dance was popularized in the 1950’s by Arthur Murray dance studios and teacher Skippy Blair. In 1959, the dance was renamed West Coast Swing. West Coast Swing became is the official California state dance in 1988 and is danced widely throughout the United States and Canada.

West Coast Swing is smooth (no bounce) and danced in a slot. The dance allows room for syncopated footwork and improvisation. Followers have more freedom than any other dance, performing their syncopations at will. West Coast Swing can be danced to a wide range of music including Rhythm and Blues, Country Western, Funk, Disco, Rock and Pop